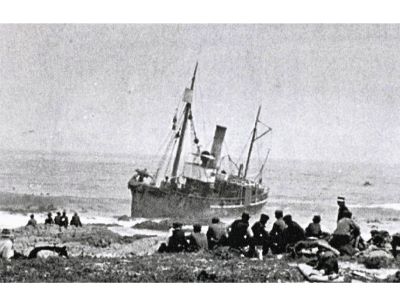 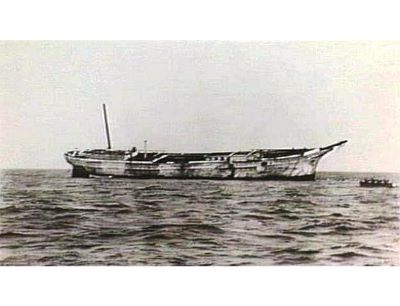 Refloating of the "Ornen"  by : "Wanderer"

The "Ornen" was a fine wooden barque of 1,100 tons register, belonging to Sandefjord and under the command of Capt. Carl Englund, on a voyage from the Falkland Islands to her home port. The cargo consisted of seal and other skin, seal oil and some 10,000 barrels in staves ready for the transfer of the oil. At midnight on July 6, 1895, she was run into off Dover by the British steamer Claudius, belonging to South Shields, bound from Rotterdam to Bilbao in ballast. The steamer struck the barque just abaft the fore-rigging on the starboard side, cutting into her decks for fully five or six feet.
The steamer, whose bows were stove in, at once lowered her lifeboat and took off the crew of the barque; when this was done the captain of the steamer bore up for the Downs. Seeing that the barque still continued to float, though with a heavy list to starboard, Capt. Englund desired the master of the steamer to put himself, and his crew, on board his ship again. This was done, but they found they were too late to prevent the vessel from striking heavily on the south part of the Goodwin Sands. On account of the strong flood-tide it was impossible for the steamer's lifeboat again to reach the vessel, so the long boat was lowered and, for the second time, the barque was abandoned.
While the crew were leaving the vessel the guns from the South Sand Head Lightship, had warned the shore that a vessel was in distress, and soon the Deal, Walmer and Kingsdown lifeboats as well as the Ramsgate tug Aid, with the lifeboat Bradford in tow, the Gravesend tug Champion, the Dover harbour tug, Lady Vita and numerous local galleypunts, and galleys were all on their way to the stricken vessel. The Lady Vita took the ground close inside the lightship and on getting afloat again, had to return to harbour.
The Deal galley-punt Sappho the first boat to reach the wreck and at once claimed her as a dereliet, employing the Champion to assist in trying to get the vessel afloat. They tried all the time the waterb was flowing but without success, just after high water the Champion gave up the attempt. The Hull tug, Englishman had now arrived on to scene and made her hawser fast. After towing for some time the barque's head was slewed round, from N.E. to nearly S. but with the falling tide nothing more could bo done.
The crew of the Sappho then started to salve as much of the vessel's gear as possible, thus opening the way for the other boats to do the same. Soon most of the boats from Deal, Walmer, Kingsdown and .adjoining places were afloat and on their way to the ill-fated craft, all eager to share in the spoil, for by this time rumours of the valuable nature of the cargo of the cargo had reached the shore. When most of the boats reached the Ørnen on Sunday evening they found that she was on the inner part of the sands, listing over on her starboard side with her deck just awash.
The three lifeboats arrived early on Monday morning, and by six o'clock there were at least 150 men on the barque's deck who were determined to get the vessel afloat, though there were some who said that even if she was got off she would sink. It was agreed that the first thing to do was to cut away the masts, and whilst some attacked the port shrouds, others commenced hacking through the masts themselves. This caused some confusion, some of the shore boats were moored on the starboard quarter of the barque and it was apparent that the masts would fall in that direction some of the men left in the boats were clambering aboard the vessel whilst others were getting in the boats to try to get them under the stern of the ship into a place of safety. The last boat had only just got clear when the mainmast fell, carrying the mizzen with it. The foremast too, was soon over the side though in its fall it smashed the deck house.
Attention had now to be paid to getting some of the cargo out, as the vessel had made a dock for herself in which, now that the masts were out of her, she rolled heavily. Soon the shore boats were making their way towards the beach deeply laden vith seal skins, staves. and the ship's gear. This went on for several days, meanwhile the firm of Gann and Sons of Whitstable, entered into an agreement with the underwriters to try and recover the vessel. They complained of the boatmen who, they said, were interfering with their work. In consequence the gunboat Seamew was sent to the Downs, her arrival caused some excitement, and her commander ordered all the boatmen to leave the wreck, greatly to their disgust.
After being on the Sands for a fortnight the tug India, Capt. Spicer, succeeded in getting the barque afloat and towing her to the London Docks for the sum of £300. The cargo was insured for £36,000. When the case came before the Admiralty Court the Claudius was found alone to blame, and the owners were directed to pay all expenses. The master of the Claudius had his certificate suspended for 12 months for failing to keep a proper look out 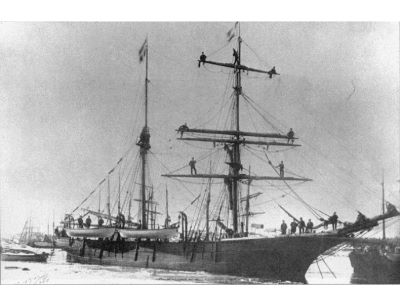 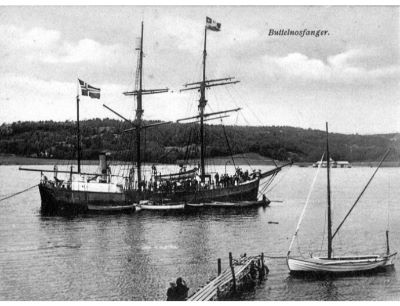